The string of today’s Zentangle-inspired Bijou tile for Inktober was a hard one, again.. It took me at least five or six tries to finally get something I could work with. Sometimes the drawing got too small and detailed, sometimes I had the impression it’s the same shape that I’ve already erased like 100 times before this month. Here’s something new: second guy in a row for Inktober: 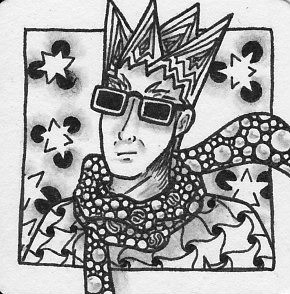 To me it’s incredible that I haven’t used one of my favourite tangles yet for Inktober: Paradox. It is not only simple and easy to draw, but comes with just SO many ways to modify and to use it – I love it. If you haven’t yet read Margaret Bremner’s brilliant article “And then some… Paradox”, then I think now is the time to do so (she wrote even more “And then some…”-articles which are ALL great and a must-read for every Zentangle enthusiast).

Then I remebered something I wrote in this blog about tangle transitions and combinations and mixed some Cruffle into Tipple. Looks nice. Then I tried a tangle I’ve never used before: Points and Curves. It has a nice optical illusion and is easy to draw, I might use it again in the near future. Cadent I added because I then had circles, squares (or something similar) and triangles – I liked this idea a lot.