Another year has come but the Diva is still taking her well-deserved break. Time to catch up on some of the challenges of 2016 that I didn’t have time for, the big goal (for this year) is to finish them all so I have a complete mosaic for 1 whole year of Diva challenges. Yeah, another challenge for myself since I already failed like… 1.000. But it doesn’t matter, I’ll get there some day eventually!

The tile for challenge #283 below actually has a long history. Some would say it’s full of misunderstandings, others would say it’s.. giving up too early on a promising opportunity. I was really motivated when the challenge was up and I wanted to incorporate tangleations and all kinds of fancy stuff into this tile. The challenge was to use the tangle Centre Square by Aleesha Sattva and was really eager to try something new since I had just recently gotten myself the wonderful ebook Overlapping Zentangle by Eni Oken and experimented with going over and under. Centre Square looked like a great opportunity to play with this concept. However, after the centre grid was finished, I was absolutely not satisfied with the outcome, it looked not at all like how I imagined it to be. And I put it away. In the months to come I looked at it again and again but it didn’t speak to me until late December 2016 when I finally finished it. I’m quite satisfied with it now (although it is too full AGAIN.. will I ever learn? X’D) but it was a real struggle. Here’s the result of the fight: 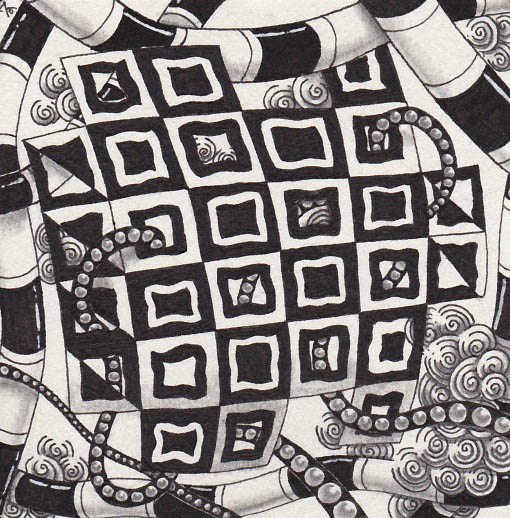 Tangles used: Centre Square, Demi, Marasu (not coiled up – or maybe only very loosely coiled up?), Printemps, Tipple (in a looooong string)

One thing I really like is the combination of Centre Square and Demi in this tile. And how Printemps is such a good contrast to all the straight lines in this tile. Ok, I have to admit it: The tile is not that bad, ok… 🙂 Centre Square is a really nice tangle and I think I’ll use it now and then in the future. Thanks for sharing, Aleesha!

If you want to see all the other tiles everybody did for this challenge, click >>here<< to go to the Diva’s blog entry.