WARNING: LOT’S OF PICTURES AHEAD! Smartphone user might want to consider their remaining data volume. Don’t say that I haven’t warned you! 😉

A little later than I hoped to post here’s the promised report about the special event I mentioned in my last blogpost. As I hinted then, this weekend was destined to be full of Zentangle. Martina, a kind and very generous soul from Magdeburg, had organized a Zentangle meeting in her beautiful hometown, Magdeburg, including accommodation in varying price categories. I’ve been looking forward to this weekend since it had be announced first in January and finally on Friday the day had come to go to Magdeburg!

Unfortunately, the way to Magdeburg was much harder than expected: On Thursday, a storm passed over the north of Germany and many train lines suffered from all kinds of damages the day after. Although the regional train usually takes less than 2 hours from Berlin to Magdeburg, detours due to fallen trees on the tracks led to 3 more trains (most of them overpacked and without air conditioning) led me arriving two hours later than planned. However, Christina from W wie Windspiel was already waiting for me in Magdeburg and as soon as we set of to the youth hostel, where we were going to stay, all those difficulties were forgotten. After a short walk and getting some rest we set off to get dinner. And what dinner that was! We went to an Asian restaurant to get some sushi and this was among the most delicious sushi I ever tasted. YUMMY! 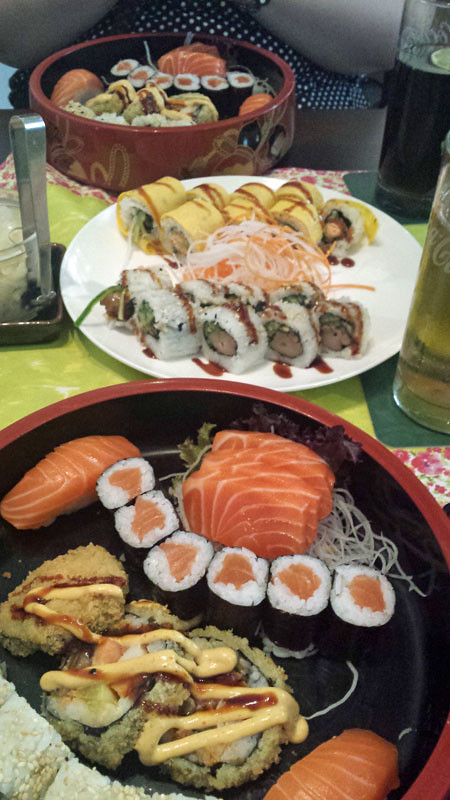 Properly fed we walked back to the youth hostel (getting some delicious ice cream on the way back ) and talked until laaaaaate into the night – or early into the morning? 😀

Next morning after a quick breakfast we set off to go to the Zentangle meeting which was scheduled to take place… in a conference room in the youth hostel. Very convenient! 😀 Martina and Dörte, Alexandra and Elli (sorry if I have forgotten anybody!) had already prepared everything: Every participant got a specially tangled name badge and even a few gifts: A travelling tangle tile from Dörte, a chocolate bar, the last part of a Facebook tangling challenge and a infinity explosion box full of bijou tiles for other participantes to tangle. In the heat of the moment I totally forgot to take a picture of everything but below you’ll be seeing a lot of the explosion boxes being tangled on for you to get the idea. Especially the box was a great idea which kept everyone busy all day long and to take something home from this wonderful day. About 25 tanglers were present and some tangles from Magdeburg and other participants provided lots of delicious treats. A few impressions – if not stated otherwise, they’re from me. If not, I added the original artist behind the picture. Thanks for letting me use your pictures! 🙂 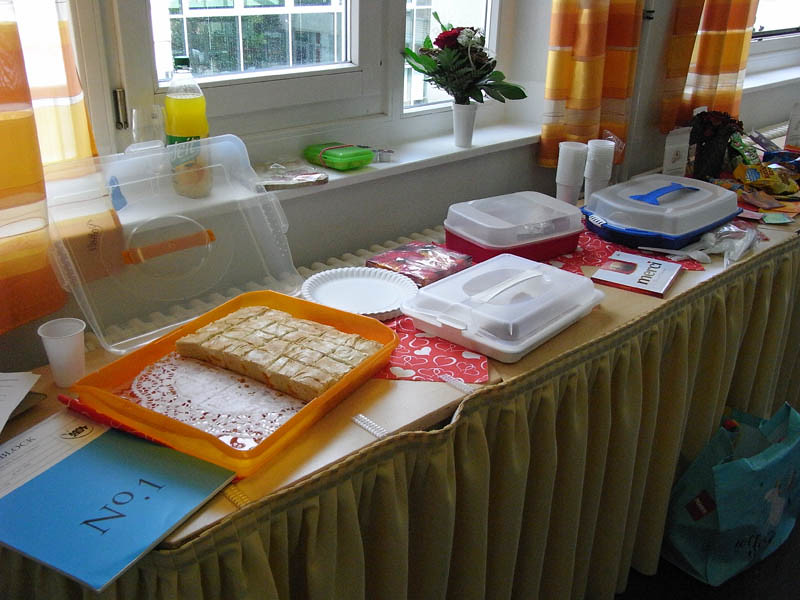 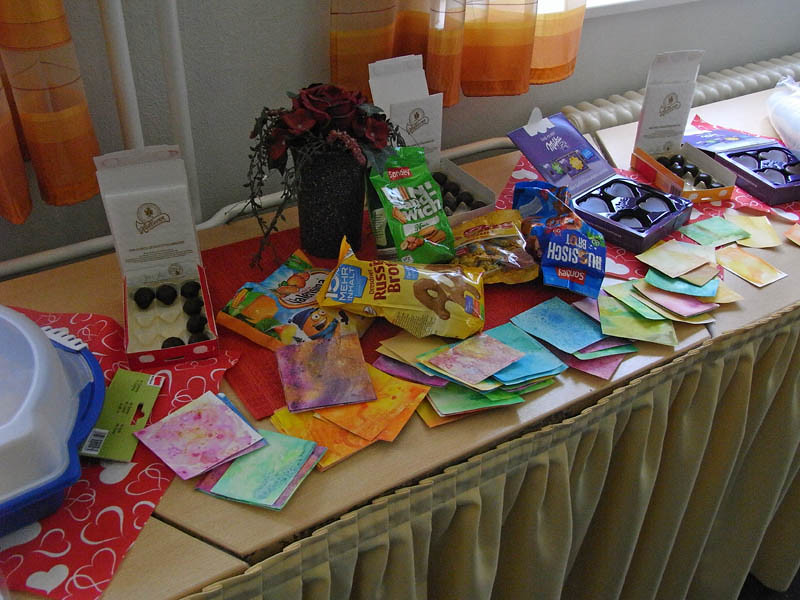 … and some more sweets – both for the stomach and as a bonus for the eye. Thanks to Karin Frank for bringing the beautiful watercolour backgrounds! 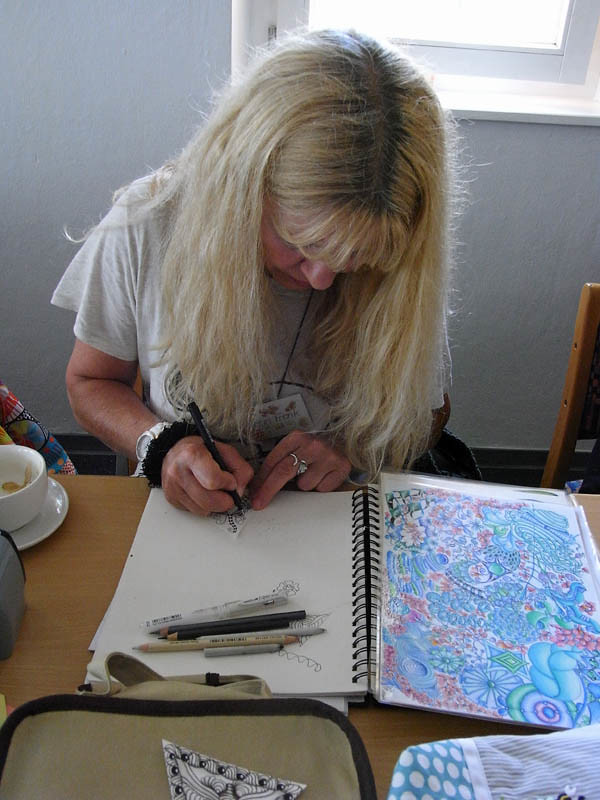 Our generous sponsor of the watercolour backgrounds. Everybody had a great time tangling (look at that gorgeous tangle reference sheet on the right!)… 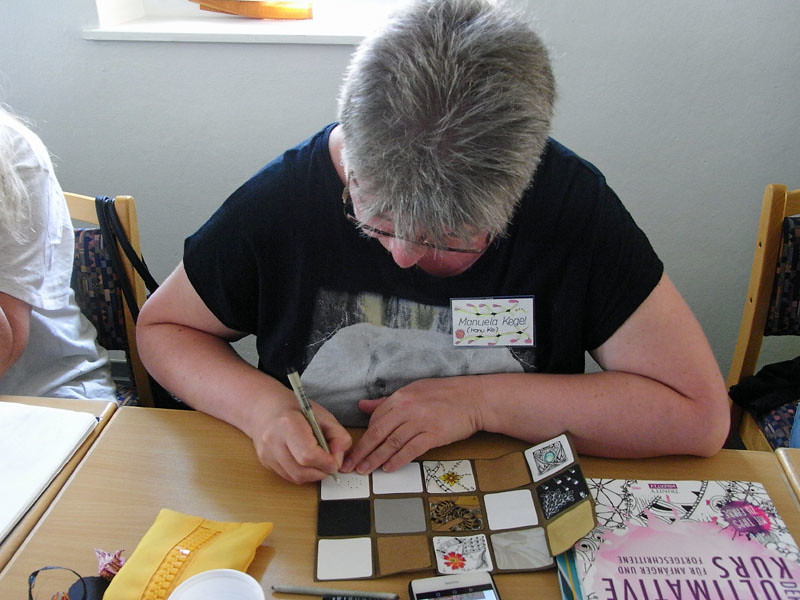 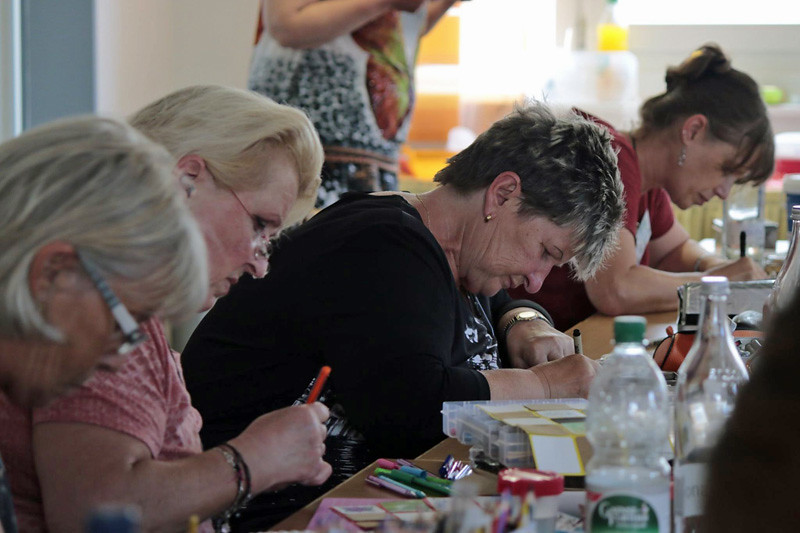 photo by Dörte Seupel-Kör
… and more… 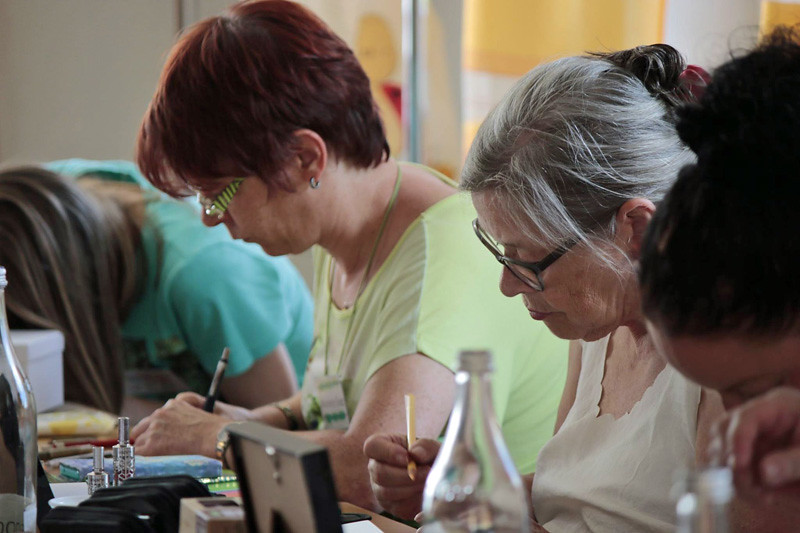 photo by Dörte Seupel-Kör
… and then some more… 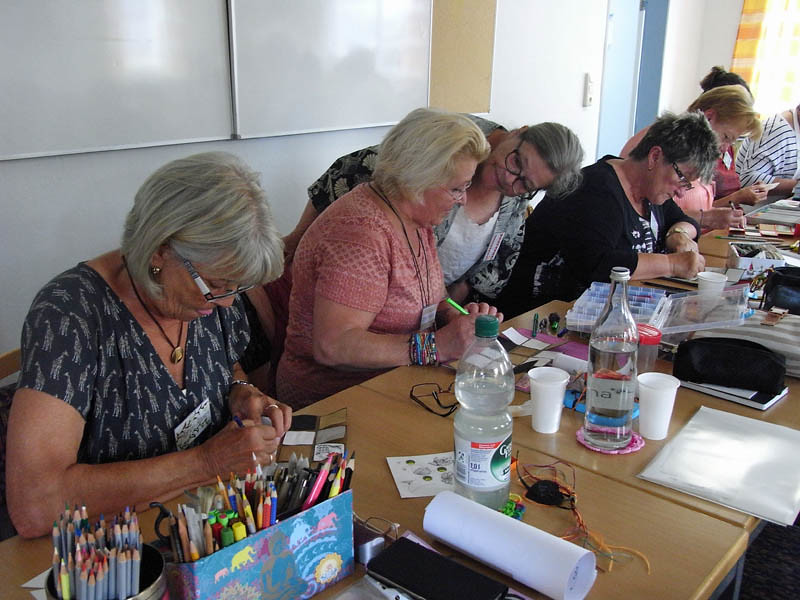 … and chatting while tangling… 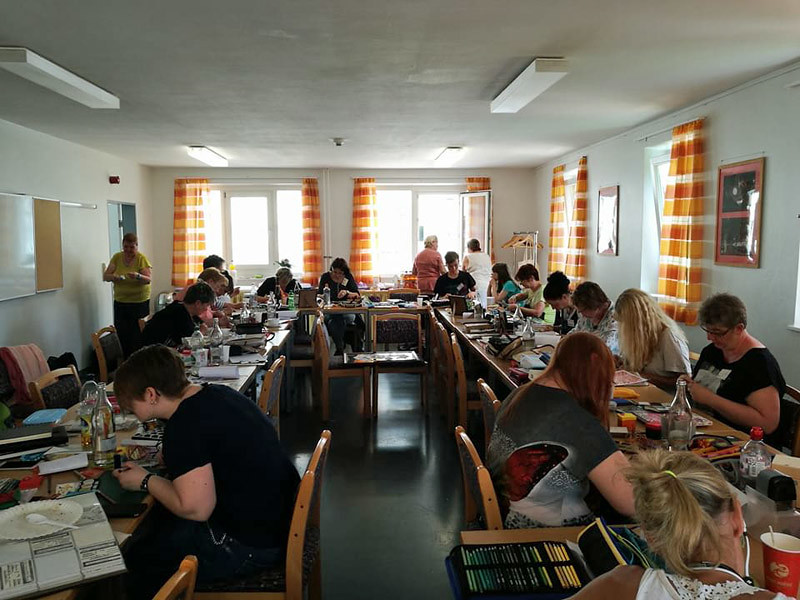 photo by Johanna Hasenkopf
… and looking – yes, front left, that’s me. Can’t remember what I was looking at at this moment.. Can you, Arva?

and eating. But since NO ONE looks very charming or graceful when eating (no offence meant, it always looks strange! 😉 ), I won’t post any pictures of people eating here.
Everybody also brought lots and lots of art supplies along and generously let others try them out, gave tips on using them and maybe even used some of them themselves (the usual drama of a drawing event I’ve already suffered many times before: You bring everything along since you don’t know in advance what of your materials you might actually need and then.. you just gave 95% of your material only a tour around town.. ;-D ). But there was a ton of great stuff around: 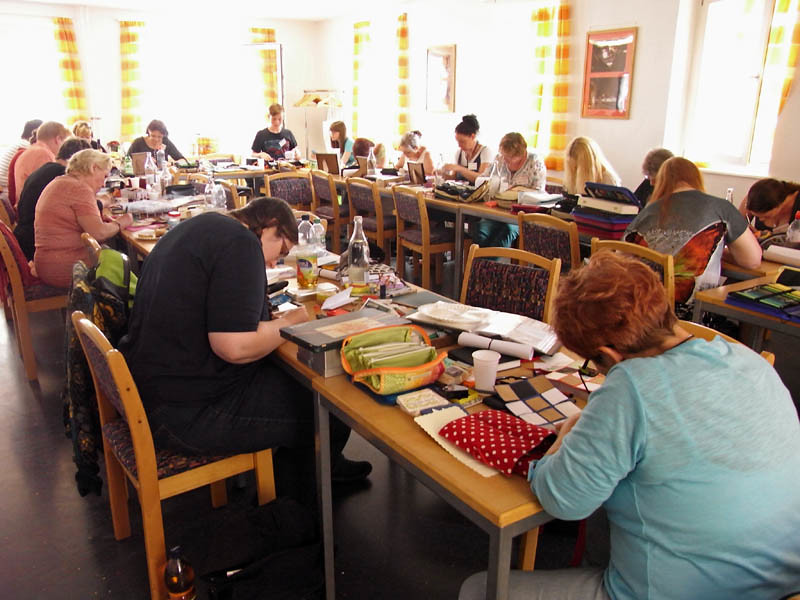 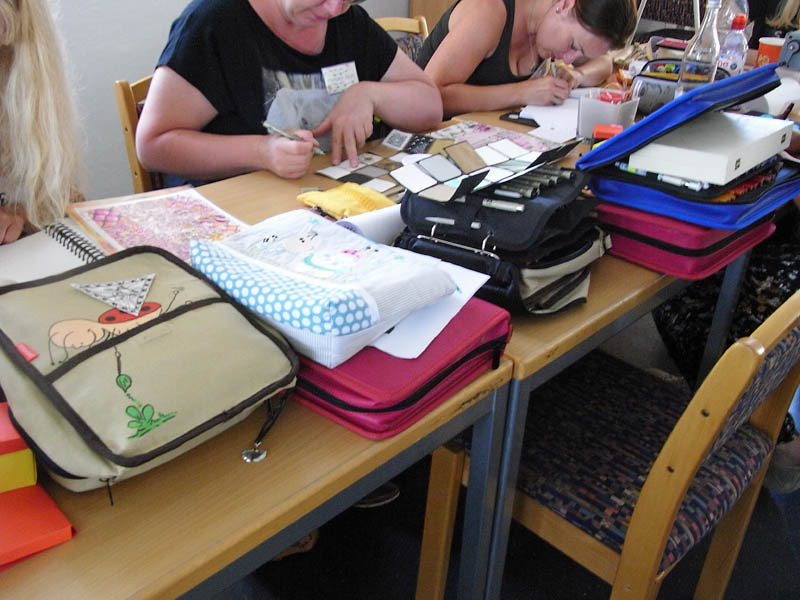 Lots and lots of pens, visible and hidden away in their cases… 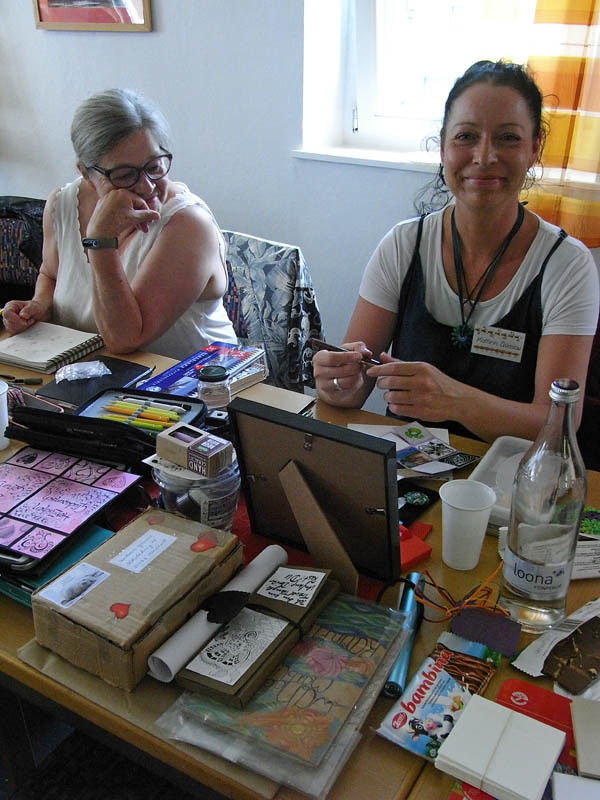 … next to finished works of Zentangle art and lots of happy faces. In the majority of the pictures people look very stern, but it’s just concentration and the flow of Zentangle. It was actually a very, very merry event!

Most of the organisation was done by Martina and of course everyone wanted to give her a gift to appreciate all her hard work to make this day happen: 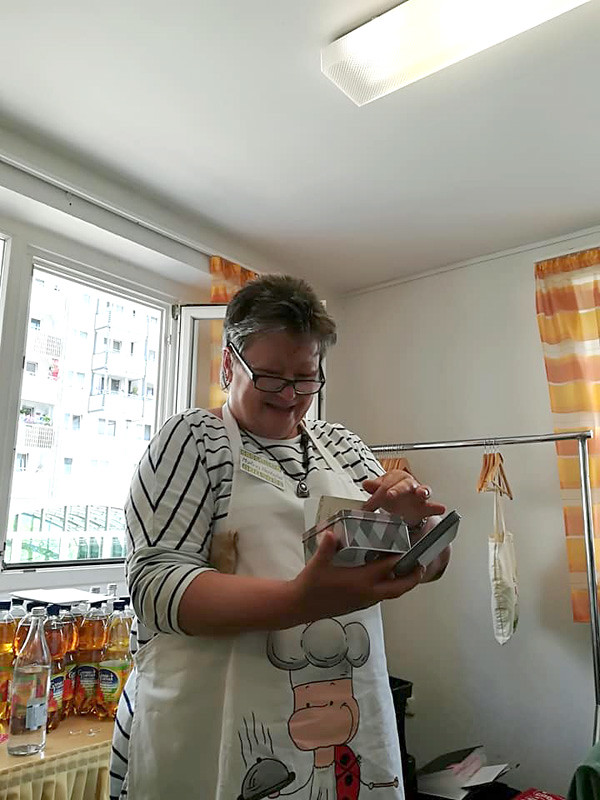 photo by Elli Jannack
Martina got a HUGE mosaic with (at least) one tile tangled from each participant. I think she was quite happy. Might be an understatement, though.. 😉 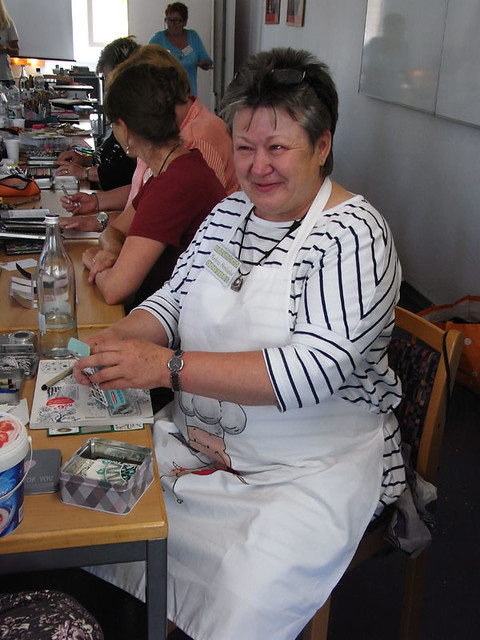 Dörte got her a pack of 3D photo clips so Martina can clip everything together to make a HUGE mosaic. In the front you can see the topmost tile of the said mosaic tiles in the tin. 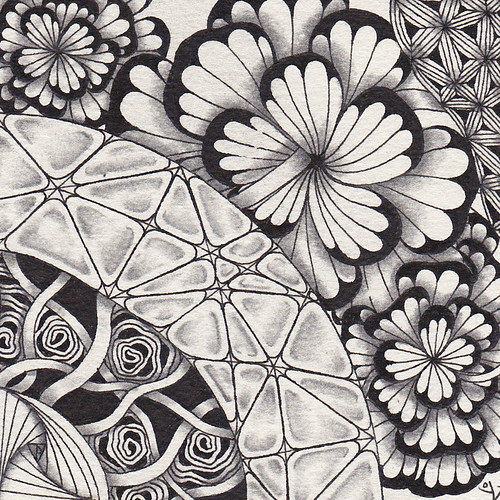 My tile for Martina. Thank you again!!

Tangling all day on the Bijous and some 3Z tiles Martina had brought along to leave as a gift in the youth hostel the hours passed in no time. Some of the fabulous results (including the Bijous I tangled): 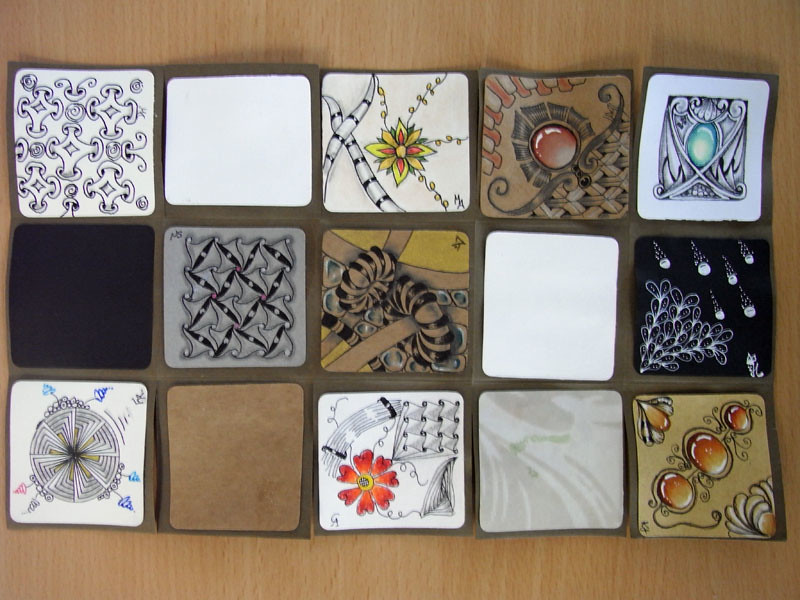 Lovely Bijous… ❤ I decided to go for metallics for all my Bijous and I'm still really happy with the choice. Love my Finetecs! ❤ 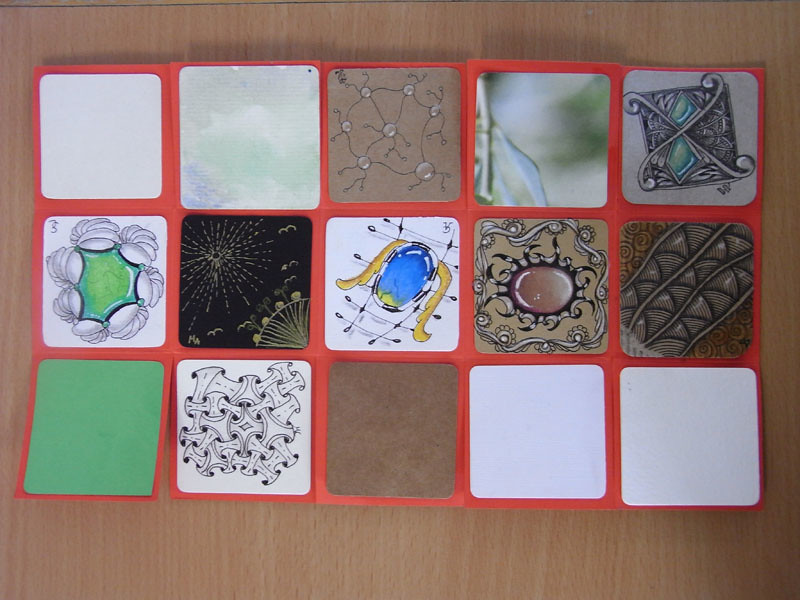 The Bijous were cut many different kinds of papers which was a very cool idea (although I remember one box with only brown paper inside). Loved the destroyed edge on this one (nope, that wasn’t me, it already was like that when it arrived at my seat!!) 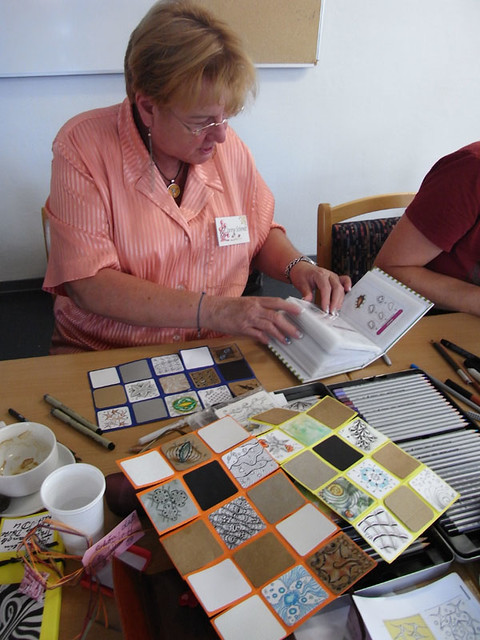 Sometimes you had a little breather when no box came around. Other times there was a flood of boxes coming around! If it hit you, you had to stay cool and “work” on it, one stroke at a time. 🙂 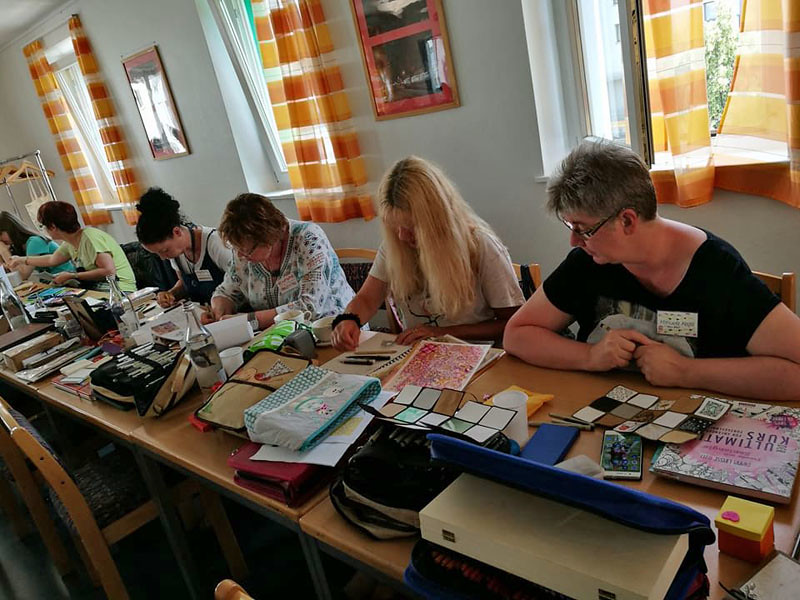 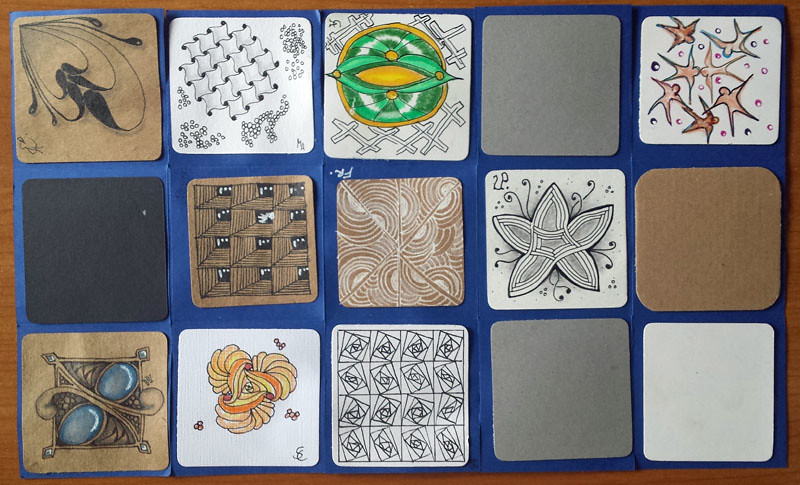 My explosion box at the end of the day. Thanks to everyone who tangled a Bijou! ❤ I guess I'll take it to the next meeting in Berlin and hope that the others will finish it for me.

And of course we all tangled a mosaic together. It was Martina's idea to make it a 3Z mosaic and the original idea was to give it to the youth hostel as a thank you for letting us have the room for a very low fee. But as I understand it, Martina couldn't part from it and – with the consent of everyone present – kept it for herself. 😀
Here's the finished work: photo by Johanna Hasenkopf
Isn’t the result beautiful? The one white 3Z was later then completed. 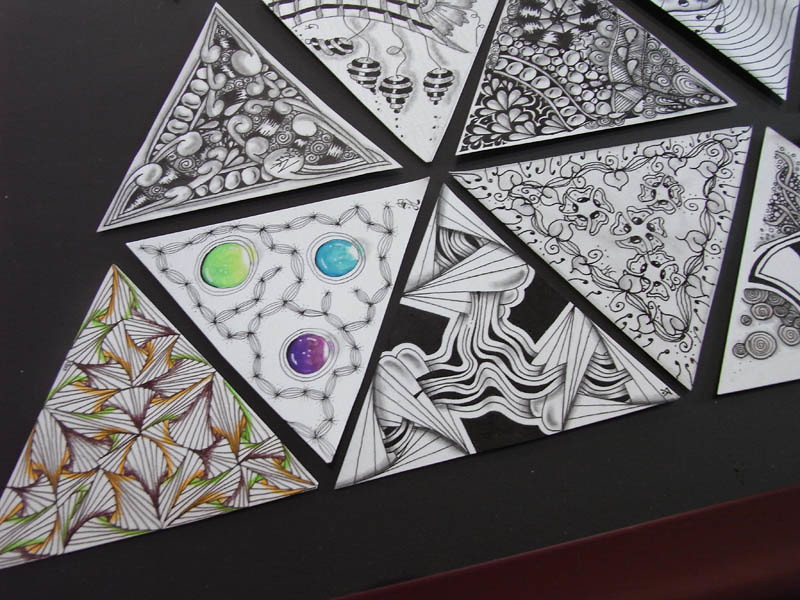 I was very happy with my 3Z tile, featuring some of my favourites with Diva Dance and Paradox/Hamadox and white some drama with pure black parts. Although the format’s very interesting, I’m usually struggling to get something done on it that I really like – it’s so narrow and I always feel cramped on it! The string I chose here, though, was a good choice I think, with only few sections to fill.

For me, this day was among the most productive days I spent drawing ever. Not only did I tangle a 3Z and 4 Bijou tiles (at least I think it was 4.. I forgot to take pictures of them before I passed the boxes on.. -_-;), I even continued to tangle a regular tile after the meeting back in the Asian restaurant: 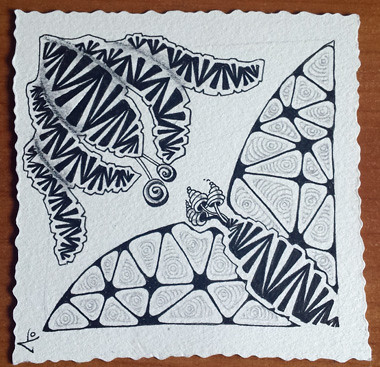 Later, Arva and I walked back to the youth hostel with a short detour to the beautiful Magdeburger Dom, past the Hundertwasserhaus, already checking out good spots for some urban sketching on Sunday. But that is food for some other blog post, this one’s already got enough pictures in it.

THANK YOU to Martina für organizing this wonderful event, to Dörte for the brilliant suprises, for everyone who brought the delicious cakes and other treats, who was open for a little chat and to everyone who came along and maybe even left a little drawing on one of the Bijous in my explosion box! The meeting was great fun and I hope to see you all again someday soon!