Wow, that was close! A last minute post before August is over.. At the beginning of the year I wanted to post at least once a month and this time I barely made it. The culprit is the game of Go, which I’ve been playing for more than 10 years now. Since the European Go Congress 2017 started at the end of July, my love of the game came back and I spent much more time studying and playing in a short time than I had since the start of the year! I did tangle a bit in between but it’s nothing that I can share with you for now. It might take a little bit longer, but you’ll see. 🙂

Anyway – how time flies! A few weeks ago already I started this tile for the Diva Challenge #329 about fragment D1. This is really a fascinating fragment and I can imagine myself sitting down at my desk for another few hours exploring the possibilities of shading and combinations with other tangles. Such fun! 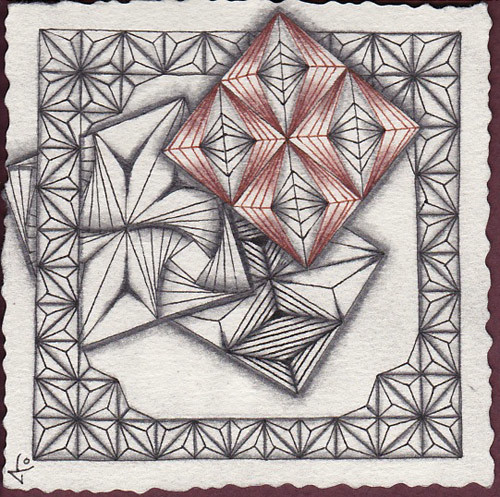 I especially like the combination with Paradox and I think I’ll experiment with those two a little bit more. This is also one of the first tiles ever that I did and where I like the sepia Micron in. It always looks streaky (when filling in areas) or much darker than in everybody else’s artwork.

Please also visit the Diva’s blog and check out all the other great artwork that was posted for this challenge!

This is a short post but I hope that next month won’t be as short – and especially not as late. Although that might be hard, there are two Go tournaments and our league team’s yearly meeting coming up. But tournaments usually means travelling, too. And on the train tangling is not a problem. So I guess you’ll be seeing “travelling tangles” of one kind or another next time. 🙂

P.S.: As time flies by, you might also already want to think about what to do for Inktober this year!