After a well-deserved rest over the summer, the Diva Laura Harms CZT is back with her weekly challenges! It’s great to finally hear from her again and see that she looks better again, too. I must say I really missed her challenges, they’re usually a wonderful inspiration to sit down and just tangle a bit – something that all too often is forgotten during a busy week.

These busy weeks have been frequent in my life as of late. Not only work has started again after my two week vacation (which because of my luggage gone missing for more than half of the trip to Italy wasn’t nearly as relaxing as I would have wished it to be), I also recently picked up playing and studying the game of Go again. Since the German Female Go Championship will be held in a few weeks time, I’m happy to say that my motivation to play and study the game again has increased a lot since going to the European Go Congress in Pisa, Italy. I’ve been spending the evenings recently doing more Go-related stuff (when I’m not working on a few ATC drawings for a swap I’m currently participating in) and I even signed up for lessons again with the wonderful In-Seong Hwan – he’s such a great teacher! Studying is a lot of fun at the moment and I hope a can reach my goal of NOT being last in the German Female Go Championship again. Since I’m still pretty weak (only 1 rank above the required minimum) and for now among the weakest players pre-registered, that’s not such a lousy goal as it might sound.

Go and the ATC swap have been mainly responsible for my lack of updates here on the blog, so, as I said above, the return of the Diva was a very welcome kick in the.. uhm.. behind to sit down and get some tangling done again, too. To warm up a bit again, the challenge was to tangle a traditional black and white tile with a few simple tangles. Since “simple” is always a relative term, I picked three tangles that I just wanted to use again and that are among my favourites (and, therefore, much used and easy for me). That’s the result: 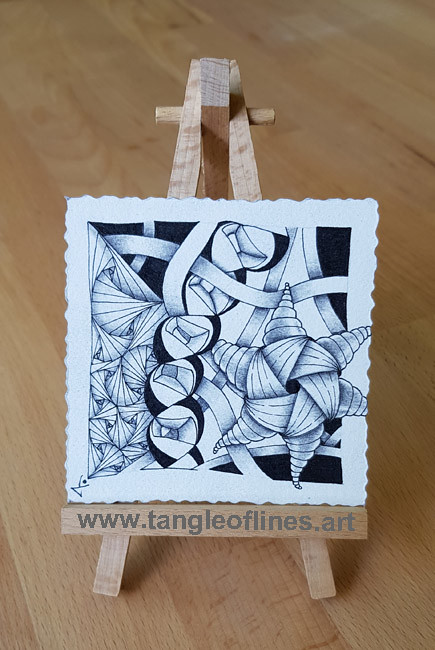 Tangles used: Hollibaugh, Paradox, Trelina
(I have a new mobile phone and I’m not so sure I like the pictures it makes of my tiles yet. Might have to fight with the options for a bit longer..

I’ve never been really good in keeping up different hobbies at the same time and/or for a longer period of time, but I hope that this time I can succeed. After lots of tangling during the past year I’m much faster now than I used to be which is an important factor. And since it’s a great way to relief some stress I strongly believe that my play will be positively affected, too. Unfortunately, due to some bad habits in the past, playing Go has become rather stressful for me under certain circumstances. I hope that Zentangle can help me to calm my nerves while I’m going for some attitude adjustment to enjoy this wonderful game more and more in the future.

Hope to see you next time!

One thought on “The Diva is Back in the House! Diva Challenge #365: Back to Basics”